Long time OTCPBC member Dick Mansell passed away this April. Dick joined our club in the 80’s with his red Doberman “Greta”. They earned their UD title and competed for us at DOCOF. Dick became an instructor for the club. He had a gift for being able to identify the source of any issues you were having with your dog. Always willing to help, he would give an honest assesment of your performance, not pulling any punches. Dick continued in dogs for many years, making many friends here. He went on to earn two OTCH titles and a TD Title on his Border Collies. He will be lovingly remembered by his long time companion, Mary Jane Kelley. Dick was 93 years old.

For many years, Dick Mansell donated an Award at OTCPBC Obedience Trials designated to be awarded to the highest scoring non-OTCH dog/non-OTCH handler in a Regular Class.

Your donation in his memory, will allow OTCPBC to continue this award as the Dick Mansell and Mary Jane Kelley Award. 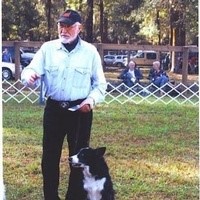