Are you ready to see how well your dog uses its nose? Have you been training a target odor for competition? Want to know more about nose work competitions? Read on. 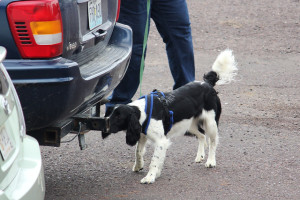 The National Association of Canine Scent Work (NACSW) is the founding body for nose work in the United States. The program was developed in 2006 in California based on detection training and bringing that training to family pets. A second venue was started by Ramsey and Shivers, known as United Nose work. UKC has taken over the program started by Ramsey and Shivers. UKC Nose work trials started in January 2015.

As a sport, Nose work requires that the handler and the dog work closely together, with the dog taking the lead and the handler providing support. The dog searches for and finds the source of a target odor in one of four types of locations. The handler learns to read the dog’s odor searching behaviors and based on knowing the dog’s behaviors is able to call an alert and identify the placement of the odor when the dog sources the target odor. The searches are timed.

The locations in competitions where odor is hidden and dog/handler teams search are called elements. The four elements are:

Odors used in nosework were chosen to be novel odors but easy to obtain and store. NACSW uses three odors; UKC five. Note, the dog does not have to discriminate among the odors, just to recognize as a target odor (one with a reward for finding).

Both organizations require a pre-certification test for each level prior to trialing. For NACSW this test is called an Order Recognition Test (ORT) and for UKC a Pre-Trial (PT). ORT/PT tests may be taken and passed in any order. Thus a dog may miss on birch and pass on anise. The anise pass is good, but birch will need to be passed in order to trial at level one. UKC accepts NACSW ORT passes as Pre-Trial passes. NACSW accepts only NACSW ORT passes as pre-requisite for trials.

OTCPBC is hosting a NACSW Odor Recognition Test on January 9, 2016. Passes on these odors will be good for both NACSW trials and UKC trials.